Not the former NBC employee, just share the same name. 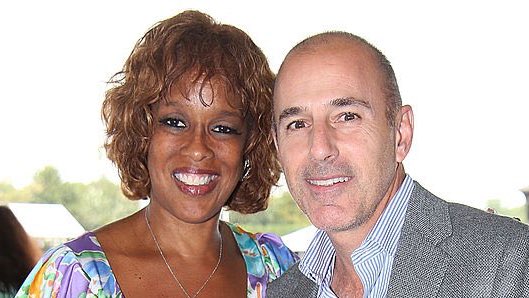 #IStandWithGayle as she hugs up with her “friend” Matt Lauer. Yes, this is the same man who stands accuse of anally raping a coworker.

But no worries, Gayle King is all SMILES, she is the white-male “bestie” yo know the neighborhood “rape apologists” for wyt males.#Firstthem

I was 'shocked' Katie Couric sat next to Matt Lauer and didnt once say a word while Matt was assaulting the entire female staff at NBC.

Matt Lauer was accused of raping his colleague at the Olympics

Harvey Weinstein is on trial for rape now

Between today’s picture of Krystal’s baby & now this, my description of your show is more accurate than ever: the super-perky radical trans-ideological 21st Century subversive sequel to the Katie Couric/Matt Lauer morning Today Show in its heyday (minus all that unpleasantness).

So Jeremy Roenick got fired by NBC, former home of Matt Lauer and Bill Cosby, and on today’s GCP, we ask the obvious question: What the f-ck did he do wrong? https://twitter.com/callahanpodcast/status/1227968409696120832

Gayle King deserves every bit of clapback and backlash she gets. When she decides to interview and question white men like Harvey Weinstein, Kevin Spacey, Matt Lauer, Charlie Rose, Les Moonves and does a documentary on Jeffrey Epstein we will back off then and only then.

R. Kelly. Mike Tyson. Matt Lauer. Bill Cosby. Harvey Weinstein. Etc. These are men who--despite their success--had no clue that hey already had the power to get what they wanted as men...without abusing their positions.
Their failure was not to recognize their place

BOBCAT FOR PRESIDENT 2020
@BobcatneySpears
1 week ago

Happened upon this Matt Lauer pic a moment ago as I was cleaning out my photo files. You're welcome.

matt lauer was our other high profile alum. needless to say, it’s been a rough few years for the journalism school and yes i am available to speak at commencement

Oh man, imagine standing/defending the same woman who has relations with all these sexual predators. Matt Lauer accused of sexually harassing an NBC reporter. Charlie Rose, who's been accused of sexual harassing over 35 women...
#istandwithsnoop #IStandWithGayle

You know what’s not cool? When your baby is watching Sesame Street

Harvey Weinstein is a monster. The book contains plenty of stories of men behaving very badly and/or criminally (looking at you, Matt Lauer), but Weinstein stands alone. He deserves to die in prison and then rot in hell.

Why Gayle King and Oprah Winfrey are after only black man , why don't they make documentary about Weinstein , Matt Lauer and Bill O'Reilly ? We love snoop. he is winner and will win! https://twitter.com/AmbassadorRice/status/1225964628515213312